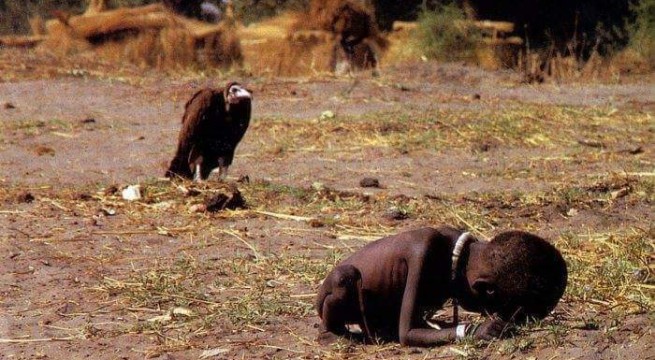 There are great ethical debates over photography, especially over photographers who document tragic events or events that are about to become tragic instead of acting as help. In an essay written almost 40 years ago, Susan Sontag notes,

Kevin Carter, a South African photojournalist comes to mind when this topic is brought up. Famous for his photograph of a vulture in Sudan, waiting for the skinny, starving, little girl in the foreground to die so it could be fed.

This is not the only photograph of its kind taken by Carter and not the only one that plagued him afterwards. People all throughout the world wondered about the girl’s fate and why her photographer did nothing more than chase away the bird and then light a cigarette as he watched her slowly continue her desperate journey.

His suicide note read this:

“…I am haunted by the vivid memories of killings & corpses & anger & pain . . . of starving or wounded children, of trigger-happy madmen, often police, of killer executioners…” (Carter, as quoted in Time)

As Scott Macleod of Time put it in an article about Carter’s life and death, “[t]he brief obituaries that appeared around the world suggested a morality tale about a person undone by the curse of fame.”

This dilemma certainly is a huge and ongoing controversy all these years later, multiplied by nearly every citizen being constantly armed with a camera or camera phone, able to freeze a moment in time instead of encouraging it to dissipate.

“To capture the moment, you have to remove yourself from the moment” (Chen).

In extreme cases this absence of involvement might mean that a child dies, a man gets shot, a subway runs over the man on the tracks. In mild cases it might mean that one forgets to experience a birthday party, a wedding, a vacation.

And that is dangerous too because at the end of your life, you could end up with a computer drive full of pictures that have little to no meaning or memory besides the beauty captured or the action of pressing a button.

This conflict is something I realized for myself a few years ago, after coming back from a week in England with hundreds of pictures of cathedrals and Big Ben that were nothing but poorer imitations of hundreds of thousands more from the internet. Why was the need to take a picture of something documented countless times already stronger than the need to walk around in that place and time, letting the surroundings soak into my mind and memory? When I see one of those pictures now, I have no recollection of the moment in which it was taken. In fact, I don’t know that I have brought the pictures out to view since a few weeks after the trip was finished.

“Photography has become one of the principal devices for experiencing something, or for giving an appearance of participation” (Sontag 10).

“Most tourists feel compelled to put the camera between themselves and whatever is remarkable that they encounter. Unsure of other responses, they take a picture. This gives shape to experience: stop, take a photograph, and move on” (Sontag 10).

Dr. Linda Henkel has researched the relationship between picture taking and the memory of that experience to find that often photographers are robbed of a significant experience to remember because they expect the camera to do it for them.

“People so often whip out their cameras almost mindlessly to capture a moment, to the point that they are missing what is happening right in front of them” (Henkel, as quoted by The Telegraph).

I don’t want to miss incredible moments. When I went to Greece this past summer, I had a month full of incredible moments. I took less photographs during that month than I did the one week I was in England. I did have more video, however. For me, video is much more alive than a still picture. Pictures can be beautiful, but videos draw me in more and revive my experiences more fully. Still, my camera was not always in my hand.

“As a photographer I have to know when to put my camera down, if just to pause for a moment in order to consolidate, or for my eyes to survey the entire scenario” (Edelstein).

I have so many joy-filled memories from living in Greece, and all I use the pictures for is to show others the beauty of the place. Ingrained in my mind forever are the moments that were lived, not captured.

“See things through your eyes or your phone’s. You can’t do both” (Guzmán).